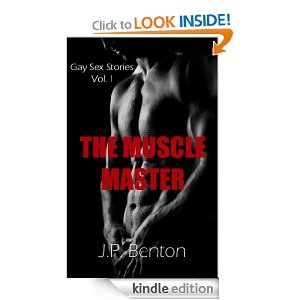 The whole story surrounds this dude, Chad, who ends up living in a closed minded, not big on gay people type area which leaves him without any action whatsoever.

So to keep his mind off things he focuses on his job and working out after hours. Well maybe the working out wasn’t a good idea because he just ends up focusing on checking out all the guys and jockeying to see some dick and ass in the shower rooms.

His secret glimpses go unnoticed, so he thinks, until he gets approached by a ripped stud in the locker room at the gym and calls him out on it. Chad tries to deny it but he knows he has been caught. Marcus, the big ripped guy, decides Chad deserves some payback and without giving the whole story away, Chad definitely gets what he has coming to him.

This is definitely a hot book if you’re into gay muscle worship and domination but if you’re not you’ll probably still love it because of how hot the whole premise is and the way things begin to escalate leaves so turned on you want to bang a hole in the floor.

Were you looking for something more interactive? Check out a gay muscle stud or find out about gay muscle hunks available for online worship.