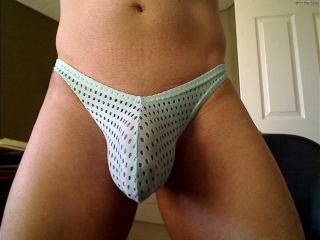 Those big heavy low hanging balls get some of you straight up hooked like a bitch, don’t they? No need to stutter, trust me I wouldn’t be typing up this article if I didn’t already have plenty of my own experiences dealing with rabid nut suckers and low hanging ball bitches.

Being a straight man of course you love having chicks licking, nuzzling and slurping on that sack but you didn’t give it much thought because you just grow accustomed to your women wanting to tongue the sack.

It wasn’t until I started owning and dominating gay slaves that I stumbled across the slaves that were truly addicted to low hanging balls. They wanted nothing more than to be able to caress them, hold them and feel their weight and a multitude of other bitch-shit.

These gay slaves fetish is completely focused on those low hanging balls you only find on real men. I always found it hilarious as hell because I could flash my sack at them and they would be rock hard and fighting the urge to bang themselves on the spot.

That is what is so funny about this gay fetish. They typically want to adore, admire and practically make love to the low hanging balls rather than have them smashing off their chin or asses.

However like with all things I jumped on this weakness and trained plenty of them into becoming real deal nut sluts. Hell one time I even made one pay me to sit in the closet and watch me big low hanging balls slapping off some chick’s pussy. Can you get more addictive and pathetic than that? Trust me I mean that in the nicest way possible.

Which brings me to the question at hand. Would you consider yourself to be a nut slut or someone who’s addicted to low hanging balls or could you care less? If you’d like to adore a set of fat hanging nuts then check out the masters on cam.